Dan has been playing competitive bridge since 1995, and teaching since 2000. Always interested in languages, he found bidding systems fascinating, starting with his Goren Bridge Complete tome. Dan has translated many bridge texts from other languages.

Dan has had success in Nationals in GNT B (finals), GNT A (semifinals twice), and the Red Ribbon Pairs (1st, 4th). He won the second OKbridge college championships in 1998 playing for the University of Kentucky. Despite all this success, he has only 2800 masterpoints, which makes him ideal for winning bracketed KO events.

In 2017 he published one of the best new books on precision, Standard Modern Precision, 2nd ed.

Occasionally you will find him commenting on top-level bridge matches on Bridgebase Online. 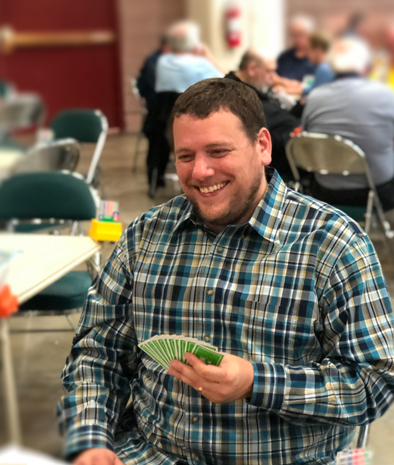 See what Dan’s students say about his teaching…

“Dan has vastly improved my game quickly. He gave me understanding of bridge, not just lessons. It is well worth it. The explanations of why are what give understanding, and Dan gives the insight as to why.”

“I was looking for a pro because I wanted to get my questions answered. What I got from Dan was full attention and someone who noticed every misstep I made and pointed things out that I did not even know enough to ask (small pointers and large ones). I’ve hired other pros (even one with 5,000+ mp), and I have to say that having someone who is truly professional (in the sense of doing their best and being 100% engaged) makes all the difference. Many pros just play on automatic – at 80% of their playing skill, and not fully focused on what you are doing (just waiting for your questions). If you goal is to improve, you can read all the books you want, but there is no substitute to having someone watch your play with hawk eyes and point out mistakes you make that you are not even aware of. This is really Dan’s gift, and he is a hell of a player too!”

“I have known Dan for approximately 3 years as a bridge teacher and player. He took me to my first Regional tournament. This young man is exceptional. He knows bridge and is an excellent teacher. Dan is an extraordinarily pleasant person. Just as obvious is his passion for the game. This brilliant person will do well at what ever he chooses, and he has selected bridge. That is great!”

“In addition to his high-quality performance at the bridge table, he also made valuable suggestions for changes to our bidding structure. These changes served us well! His knowledge of systems and conventions is amazing!

“I look forward to our next outing together.”

“I originally met Dan through Bridge Pro and have worked with him over the past year. Dan is an excellent bridge partner with a youthful and facile mind, and knows his subject thoroughly.

“Most importantly for me, he provided constant positive reinforcement and encouragement, which allowed me to I grow a lot in my skills, and gain a lot confidence. Working with him has been invaluable.”

“I was fortunate to watch Dan critique a bridge group online.  I was so impressed with how bright, and to the point he explained the bidding, play of the hand, discarding and leading,  I could not wait to see if I could get him to give me lessons.  I have taken lessons in Pa, and Fla. , and none have been as thorough as he seems to be.  AND………he also has a sense of humor. How lucky I was to find him quite by accident…..”